The longer children are taught in their mother tongue, the better they perform in school. In addition, they learn more about their own culture, and appreciate it more. This was the outcome of a debate on intercultural multilingual education that took place on July 31, 2013. At the Venezuelan Cultural Institute in Paramaribo, village leaders, educators and other interested participants discussed ways to combine cultural preservation with better opportunities for indigenous children. Among those present was the Venezuelan ambassador to Suriname. The evening was organized by the Association of Indigenous Village Leaders in Suriname (VIDS), in anticipation of the National Day of Indigenous People on the 9th of August.

Challenges
VIDS chairman Lesley Artist confirmed during the discussion evening, that multilingual intercultural education is a priority, but also presents a great challenge. He wondered whether enough qualified teachers can be trained to master the language and culture and who are also willing to work in their own village. He pointed to the poor state of many schools and teachers’ homes. These conditions do not encourage teachers to work in their villages of origin.

Indigenous Educational Festival
There have been previous activities in Suriname to increase indigenous children’s awareness of the value of their own culture and traditions. In 2008, an Indigenous Education Festival was organized in the Lower Maroni area. More than 300 children participated in workshops on traditional skills. From their parents and grandparents, the children learned skills such as baking cassava and making roofing out of palm leaves. They also learned to make jewellery, shawls, pottery and wood carvings.

Belize and Ecuador
In Belize, intercultural multilingual education (IMO) helps to reduce the number of dropouts. Maya leaders took the initiative to break the poverty cycle which has trapped the indigenous peoples of Belize. Young people learn the values, skills and knowledge from their own Mayan culture. But they are also prepared for modern entrepreneurship. During the discussion evening, a documentary was screened which showed that these youngsters are better able to cope with the challenges of the modern world. Also in Ecuador, good results were achieved with multilingual intercultural education.

Language is part of identity
During the discussion evening, possibilities were discussed to maintain Kari'na, Lokono and other endangered indigenous languages, and their dialects spoken in Surinamese. A question from the audience whether Sranan, the Creole language that is widely used in Suriname, should replace the indigenous languages, produced many negative reactions. Language forms part of your identity. Indigenous languages are the oldest languages of Suriname, so why should these languages to make way for another language? Instead, Surinamers should be proud of the great diversity of languages found here. The knowledge inherent in these languages, such as in the field of biodiversity and medicinal plants, can be used for the further development of the country. 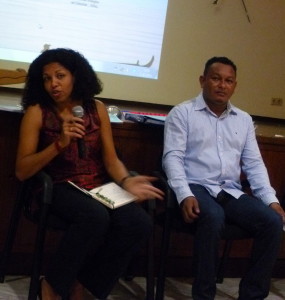