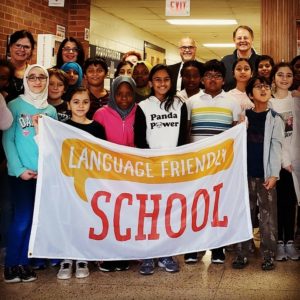 The Rutu Foundation works to eradicate all forms of language based discrimination in education. We do this by supporting Language Friendly Schools. We also encourage international human rights bodies to clarify that such acts constitute human rights violations.

On 27 March 2020, the Rutu Foundation submitted an Alternative Report on Language Based Exclusion, Punishment and Discrimination in Dutch Education to the United Nations Committee which oversees the International Convention on the Elimination of All Forms of Racial Discrimination.

Although quantitative data is lacking, there are strong indications that the practice of prohibiting students (and their parents) from speaking a language other than Dutch in school is widespread in the Netherlands. This includes stopping students from speaking their home languages with each other while playing on the playground. Or asking parents not to use their mother tongue with their children when they drop them off and pick them up from school.

When children are discriminated against in school, humiliated by teachers and bullies, or regularly punished, their socio-emotional and cognitive development is greatly hindered. They feel greater shame for who they are. They feel even more like outsiders at school. And they perform worse academically than children in schools where such practices do not occur. These children drop out at higher rates. Some are even forced out of educational institutions (as in the case of a Dutch-Turkish secondary school student who was expelled from school in 2013). This significantly reduces their future earning potential. It also deepens the inequities between dominant and minority groups.

In the Netherlands, the suppression of home languages has become thoroughly internalized. This is because of the persistent belief that ‘forgetting’ one’s mother tongue and speaking the dominant language is the only way to achieve economic and social success.

Update: On 25 August 2021 the Committee adopted its conclusions and recommendations on the Netherlands and recommended that the Netherlands ensure that multilingual students with a migration or minority background are not prohibited, restricted or punished for using their mother tongues at school.