The succesful revival of Negrito culture in the Philippines 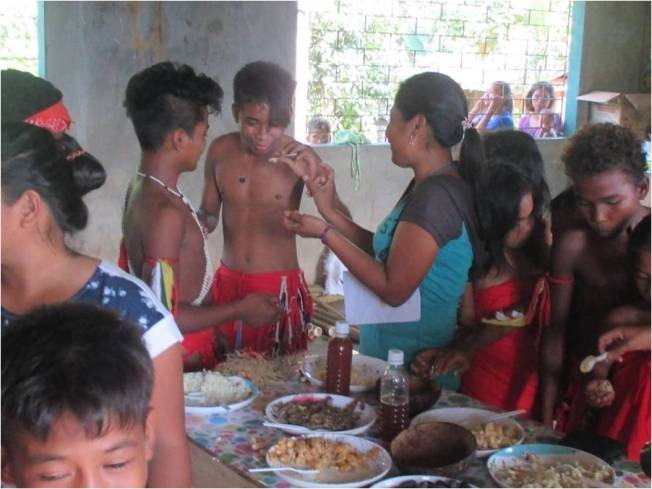 Report of a Rutu Foundation ‘Evening at the Lloyd Hotel’ Amsterdam, April 16, 2015

Culture, language, biodiversity, and honey were brought together at the lecture ‘Hunting and Gathering in the Philippine rainforest: for children too?’ which was organised by the Rutu Foundation. Curious about the connection? Please read on, because there’s more than wood to be found in the forests.

Speakers Jenne de Beer and Ellen-Rose Kambel (director of Rutu Foundation) gave fine examples of projects that focus on the intersection between indigenous languages, biodiversity and education. Indigenous peoples have much knowledge about biodiversity in the area where they live, and about coexistence with nature. This knowledge is woven into the language spoken by the groups. Names for insects, plants and animals contain all sorts of useful information, such as: is it edible? Is it dangerous? Can it help you if you get sick? Where does it live or grow? The Yanomami of Venezuela, for example, have 45 different names for bees, 24 for wasps and 33 for ants. It is no coincidence that places where many different species of flora and fauna are found (so-called biodiversity hotspots) overlap with areas where a lot of (indigenous) languages are spoken. The detailed knowledge stored in these languages is associated with the transfer of sustainable methods, which are necessary for different species to be retained.

Disappearing languages because of logging and mining
However, native habitats are shrinking as a result of logging, mining and large-scale agriculture. There is great pressure on indigenous youth to switch to another language, because it would provide a better future in the cities where they move to. In reality, because of discrimination and a large educational gap, these youth become an underclass, and have a disproportionate chance of alcohol and drug addiction. But the disappearance of the native language goes hand in hand with the disappearance of unique knowledge about conservation of the tropical rainforest. Losing centuries old knowledge about medicinal plants which is used by pharmaceutical industries would directly affect Western society.

Hunting and gathering in the tropical rainforest: something for children?
The Negrito people of the Philippines have shown that it is possible to reverse the process of disappearing cultures. The Negrito are the oldest indigenous group in the Philippines. ‘Negrito’ is a collective term for various ethnic groups such as the Agta and Aeta, coined by the Spanish. They make their living from hunting and gathering. A few years ago the culture and language of the Negrito were threatened to be lost completely.

Jenne de Beer, cultural anthropologist and for many years consultant to the Negrito leaders and teachers, spoke about the initiatives that the Negrito started themselves, aimed at the revival of the Negrito culture and language. The main goal is to increase the confidence of the Negrito, because they are often discriminated against and belittled in Philippine society. During cultural festivals, own knowledge and traditions are celebrated and made visible, so that a positive image of Negrito culture is promoted. Moreover, by focusing attention on indigenous languages and indigenous knowledge in regular primary education, the self-confidence of youth and pride for their cultural heritage are growing. This confidence motivates youth to stay in school, makes parents more involved in education and ensures the protection of knowledge.

Jenne’s story inspired many of the people present at the lecture, who enjoyed various kinds of wild honey brought from South East Asia during the break. When asked where the idea came from for the festivals, Jenne stressed that the initiative was initiated by concerned indigenous leaders and parents who were worried about the loss of their cultural heritage. Another question that arose was whether young Negrito people are actually interested in traditional culture, or if they would rather focus more on the mainstream (and Western) culture. Nobody wants to be the losers, answered Jenne, especially not young people. But joining the dominant culture from a discriminated position and without knowledge of your own traditions gives a great disadvantage and low status. Through the festivals and the attention to the language and culture in education, young people get in touch with their traditions in a positive way, and more positive information is shared about the culture. In this way, they strengthen their own identity and slowly change the image of traditional practices in the dominant culture.

The Negrito need your support to continue their efforts. Click here to find out how you can help.

Culture in Education: the Negrito Peoples of the Philippines.

Marie-Claude Mattéi Muller, ‘The Indigenous Peoples of Venezuela in Search of a Participative and intercultural education for their survival’. In: UNESCO 2009, Learning and Knowing in Indigenous Societies today, edited by P. Bates et al, UNESCO: Paris, p. 13-14