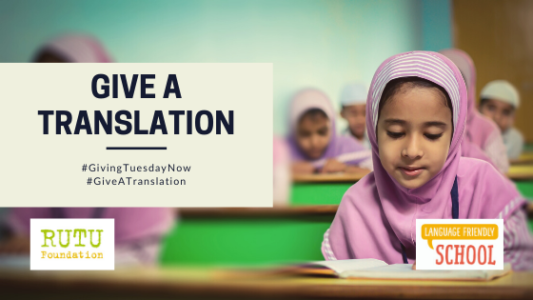 On 5 May 2020, a new global day was launched for giving and unity: Giving Tuesday Now.  An emergency response to the unprecedented needs caused by Covid-19. The Rutu Foundation used this new day to start a campaign called “Give A Translation”.

As a result of the worldwide school closing, we realized that multilingual children who speak a different language at home, would miss out on the languages they would otherwise use at school.

Fortunately there is Storyweaver: an online platform that offers thousands of wonderfully illustrated and culturally diverse stories for children of all ages. The stories are translated into many languages so multilingual children can enjoy stories in their own language, but also in the school language. This helps them to build proficiency in both languages.

While some stories are available in over 160 languages, not all have as many translations. For example, few stories are translated into Dutch. This means that, even though the mother tongues of children may be available, the stories cannot be read in the school language. For some languages there are no translations at all. Examples are Papiamento and Sranan which are spoken in the Caribbean. Many indigenous languages are also missing.

Our Goal: One Hundred Translations Within One Month

The Rutu Foundation took up the challenge to give a significant boost to the stories available for multilingual children on Storyweaver. Within one month, we set a goal to translate one hundred stories and give thousands of children access to great, imaginative stories from around the world in both their mother tongue and the language they use at school.

The Language Friendly School is our new global network of schools who welcome and value all the languages spoken by their students. Providing multilingual learners with books and stories in their mother tongues is a powerful way to boost learning and to make them feel included and appreciated in school.

Almost fifty volunteers reached our goal and then some: more than 130 stories were translated into 18 different languages! These included languages that were not available previously on Storyweaver such as Sranan and Papiamento/u, but also regional Dutch languages (Frisian and Limburgish) and languages spoken in the Baltic and Eastern Europe (Estonian and Belarusian). You can read all the stories here or scroll down this page.

We are extremely grateful to all of our translators, including the multilingual talents of the KLM crew!

The campaign has ended but you can always translate stories!

Translate a story yourself: To translate a Level 1-story on Storyweaver takes no more than 30 minutes. Register at Storyweaver and follow their instructions for translation. Choose a story you would like to translate (any language, it is all up to you!). Finally, share your translation with us on on Twitter or Facebook using the hashtag #GiveATranslation, or send us an e-mail.

Join us in giving more children access to free stories in the languages they understand and need!