Does a teacher need to speak all the languages of their students? 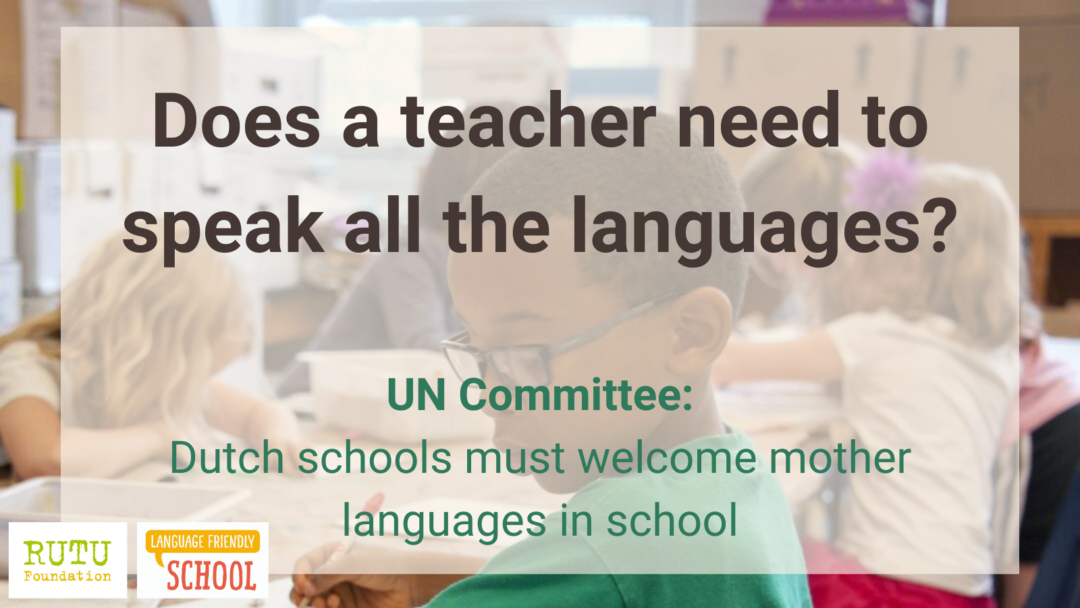 In August 2021, the UN Committee Against Racial Discrimination expressed its concerns about discrimination of multilingual children in the Netherlands. The committee confirmed that restricting or punishing children for speaking their mother tongue in the school environment is discriminatory and that the Netherlands should take measures to ensure that this does not happen anymore.

We can imagine this report raises questions for teachers such as:

Does a teacher need to speak all their students’ languages?

Internationally, the best practice for multilingual children is considered to be mother tongue based multilingual education: offering children instruction in a language they know best, while also including the dominant language.

The good news is: it is absolutely not necessary for teachers to speak every language! You can still use the wide variety of languages present in the classroom, without understanding the languages themselves. Here are some examples: 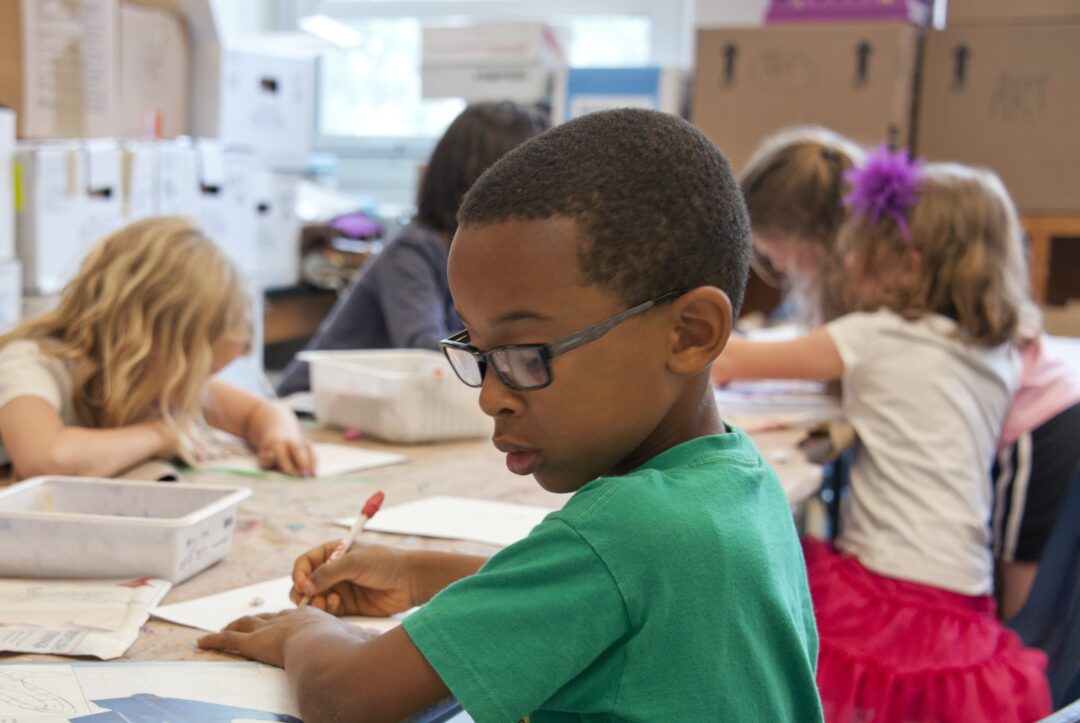 END_OF_DOCUMENT_TOKEN_TO_BE_REPLACED

Internship Opportunities at the Rutu Foundation

The Rutu Foundation is seeking a creative, motivated, and proactive intern with an interest in languages and education for a part-time (8 hours/week) Marketing and Communications position. We are an award-winning international non-profit based in Amsterdam committed to advocating for multilingual education. As our Communications Intern… read more here

The Rutu Foundation is seeking a motivated and proactive fulltime or part-time intern for our Marketing and Development position. Read more here

On Saturday 3 April 2021, De Dubbeldekker, a public primary school in Hilversum, the Netherlands, celebrated its official certification as a Language Friendly School. “This means that we welcome the cultural identity of our students, which includes multilingualism,” explained the principal, Jacqueline van den Bor.

During the covid-proof celebration, the school raised a flag with the Language Friendly School-logo and offered ‘language friendly school’-cakes to the small group of parents, teachers and students who had gathered. 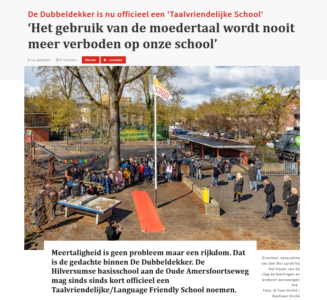 For De Dubbeldekker, multilingualism is not perceived as a problem, but as a strength. “The use of the mother tongue will never be prohibited anymore at our school”. Lidy Peters, the support coordinator (interne begeleider) said: “It is wonderful to see students’ delight when they are asked to provide knowledge about their home language.”

The Dubbeldekker-school team had already started professional development courses on integrating multilingualism in their teaching strategies, when teacher Pauline Simons heard about the Language Friendly School.

Using the Language Friendly School Roadmap, the team mapped out what they were already doing and then which language friendly-activities they would like to develop further in the future.

As part of the Language Friendly School network, the Dubbeldekker will have access to an online toolkit, a library and most importantly: experienced colleagues to exchange ideas with. 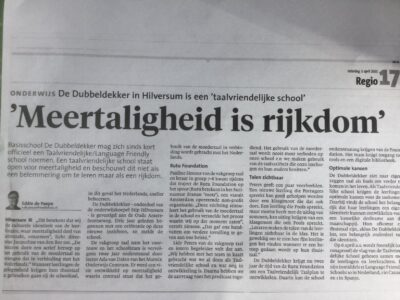 Children love picture books. And picture books are a great way to introduce children to reading and to build their vocabulary. For children from ‘small language’ communities, however, there are not many children’s stories available. In May 2020, the Rutu Foundaton launched the campaign #GiveATranslation. The challenge was to translate 100 stories in one month. Volunteer translators translated more than 130 children’s stories from the website Storyweaver into 18 different languages. One of those languages was Papiamento. The mother tongue of the majority of children in Aruba, a Caribbean island that is part of the Kingdom of the Netherlands with a population of 100,000 people.

One year later, the Language Project (Proyecto Idioma) of the Department of Education Aruba (DEA) has the pleasure of announcing the publication of 21 digital stories in Papiamento, with more on the way for a total of 60 children’s stories. These have been translated from tales on the website StoryWeaver and published to it’s innovative online platform, which provides free and open access to multilingual reading material for kids in order to reach as many kids as possible on a global scale.

“Children whose languages are not spoken at school are torn between two worlds, that of the language(s) spoken outside the school and that of the language(s) admitted to the school in predefined and exclusive spaces. How many of these students have been told that they have an accent, pretty or ugly? Followed by the question where they – really – come from. The effect of such comments is always the same: children understand that they do not belong to the local school community.”

Language diversity is not a problem but rather the solution

For Language Friendly Schools, language diversity is not a problem but rather the solution to create a climate of inclusion and well-being. A Language Friendly School values all languages of the community equally. The objective is that all students feel welcome, enjoy their full identity, and build on that to enhance their overall academic performance. Principals, educators, students, community members, and parents or guardians work together toward these common goals.

How do Language Friendly Schools do it?

But why don’t you watch the video and have a look for yourself!

Take a look at our Language Friendly Schools

Get to know our Language Friendly Schools in the Netherlands and Canada! Click on the link to discover tips for success, activities and get a sneak-peek into each schools’ individual Language Friendly approach. 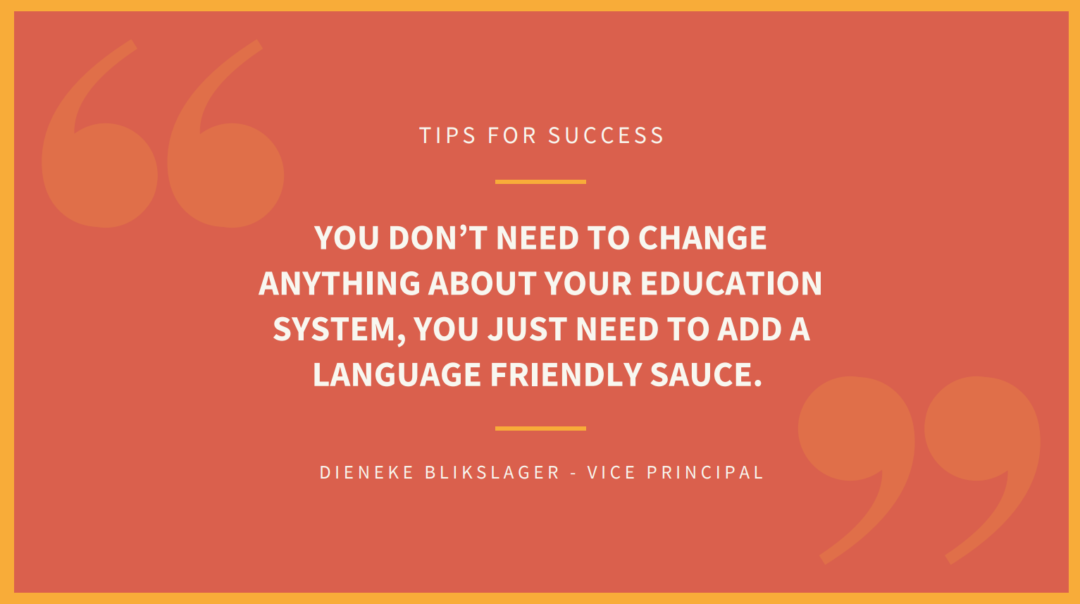 February 21st is the International Mother Language Day. This day was declared by UNESCO “to promote the preservation and protection of all languages used by peoples of the world”. The theme of 2021 is “Fostering multilingualism for inclusion in education and society.”
The whole week leading up to February 21st, we are spotlighting our Language Friendly Schools who welcome, value and include all languages at their schools.

The first Tip for Success comes from the vice-principal of the St. Janschool in Amsterdam, Dieneke Blikslager, who states that when it comes to language inclusion “You don’t need to change anything about your education system. You just need to add a language-friendly sauce.” Click here to find out more about what makes the St. Janschool a Language Friendly School. 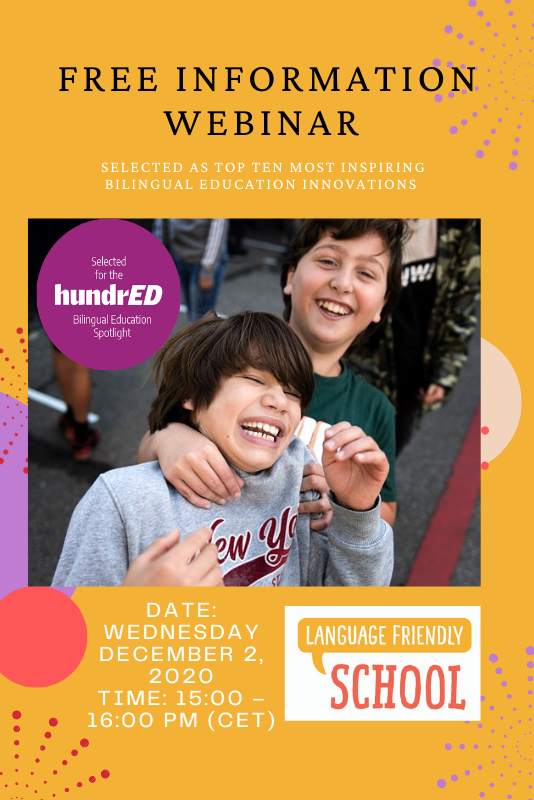 With the Language Friendly School, we envision a world in which all children have access to a language friendly-learning environment: a place where they feel accepted and valued for who they are and no child is punished for speaking his or her mother tongues in school. All schools are welcome to join. The network is open for primary and secondary schools; international, private, public and many more.

Due to the current COVID-19 crisis, the onboarding process for new schools in the network of Language Friendly Schools has gone virtually 100% online. This means that for new schools around the world, we do not have to wait for a local partner to support your school in becoming language friendly. We will organise a series of free online information webinars to explain the first steps.

The next information webinar will be held on Wednesday 2 December 2020, 15.00-15.45h (CET). To register for this webinar or stay updated on future webinars, please fill out this form. Please note: to allow for optimal interaction, we have room for a limited number of guests.  If the webinar is full, we will notify you of the next opportunity.